From the beginning, we came together at GO around the belief that every child in our community deserves the kind of education that gives her great choices in life — and that not nearly enough of our children receive that education today. While I have been part of the team at GO aiming to build a movement for quality schools for over a decade, it was only last year that I stepped into the role to lead our team here in Oakland. As I wrote a few weeks ago, it’s been quite a year.

Moving into the coming year at GO, I am so excited to have the chance to continue building upon our strong foundation and to bring in additional leaders whose skills are deeply aligned with the vision that we have for public education in Oakland. More than ever, we’re building a vision that bridges boundaries and labels to focus on strong public schools — district and charter. My job, and my opportunity, is to build a team with the passion, skills, and experience to turn that vision into reality. That’s why I’m so excited about two new teammates who have seen education from every side and know what it takes to create excellence.

Yanira Canizales is a lifelong educator who is also a mother of four Oakland kids. She worked in OUSD, at New Leaders developing teacher leaders, and most recently was the founding principal of Lodestar. She is an organizer and advocate at heart (and in practice) and believes deeply in empowering families in Oakland to demand quality for their children. She will join us as the Director of Community Leadership, responsible for building a movement of Oaklanders to advocate with us for our policy and political campaigns.

Thomas Maffai is also an educator – he has worked as a teacher (and is the son of two public school teachers), as a district leader in Boston Public Schools, and at policy organizations like The New Teacher Project. More recently, he’s been leading the policy team at Innovate Public Schools (where his team recently launched a major project about the Top Public Schools in the Bay Area for Underserved Students and The Advocates Guide to Transforming Special Education). He is a prolific writer, often on the national stage, about the complex issues facing public education, from supporting ELL students, the role of educators in the 21st century classroom, teacher diversity, and desegregation. He will be our Director of Policy and Advocacy, charged with providing the policy analysis, perspective, and leadership to ensure we win policy advocacy campaigns for Oakland students.

Thomas and Yanira join a strong team of staff who, with all of you, will continue to move the work forward in the coming years. We will be adding others to our team as well – we’re currently hiring for an Operations Coordinator and Director of Strategic Initiatives.

To welcome the new team, bring together our community, and announce our advocacy areas for the coming school year, we’re hosting a Back-to-School Party on Thursday, August 29. I hope you’ll join us to meet these folks and raise a glass to another year of work on behalf of students and families. RSVP HERE.

As we bring on new team members, we are also celebrating the contributions of one of our key leaders. Nima Tahai, who has led at GO for 3 years, will be transitioning to work closer to home in the San Mateo/Foster City School District as the principal of Parkside Elementary. Prior to joining the GO team, Nima worked in OUSD as the principal of Garfield Elementary and he is excited to return to school leadership and lead the school his own children may attend one day. While we will miss Nima, we are proud of him for his dedication to serving students and families. His work over the last three years has been incredibly impactful, from launching an OUSD principal budget group in 2017 to keeping Oaklanders informed about OUSD’s budget challenges and sharing updates about the big things happening in every OUSD board meetings. In reflecting on his work at GO, Nima shared: 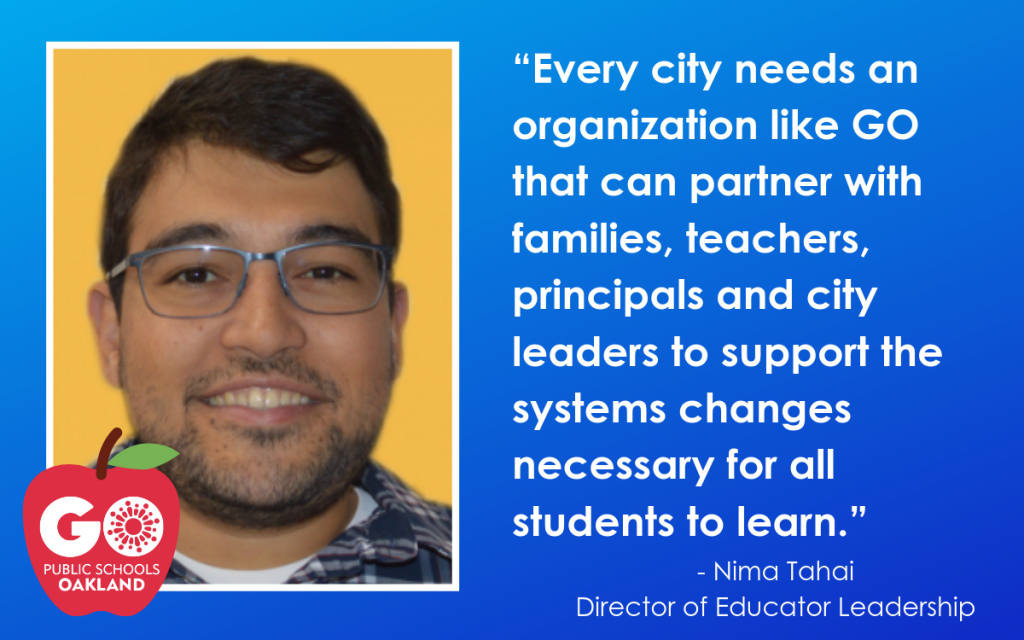 We thank Nima for his work here at GO on behalf of all Oakland students – I invite you to join us in appreciating his work by dropping him an email of gratitude.